Summary: The Georgia Trust for Historic Preservation announced today that a 102-year-old magnolia tree on the front lawn of the iconic Rhodes Hall was removed. Planted in 1917, the tree snapped a critical brace and suffered more damage this summer. Earlier this month, it was deemed to be a safety hazard. This is the second historical magnolia tree in midtown to be lost in storm damage in recent years. Storm damage and housing development are eroding Atlanta’s canopy at an alarming rate, and the importance of maintenance and replanting is increasing. Homeowners are advised of how to prepare for the upcoming storm season in an El Niño year. 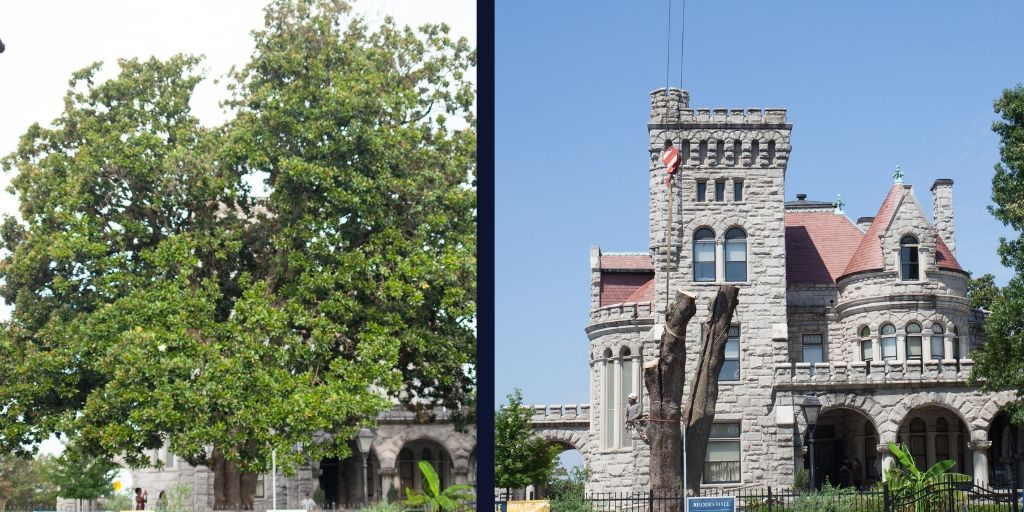 The Georgia Trust for Historic Preservation announced that a 102-year-old magnolia tree on the front lawn of Rhodes Hall was removed today by Peachtree Arborists. Planted in 1917, the tree weathered many Atlanta storms. 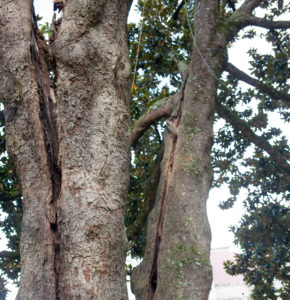 About 15 years ago, the tree suffered initial damage when the trunk split. The Georgia Trust enlisted an arborist to strap and secure the tree, giving the magnolia more than an additional decade to showcase its regal blooms. Earlier this summer, efforts to stabilize the tree failed when a new large fracture emerged over the trunk nearest Peachtree Street.

Despite its full canopy of leaves and flowers, the tree was entirely hollow. Its trunk was cracked in several places and stabilizing cables snapped due to stress. With the magnitude of the damage and decay, the tree posed an immediate risk and the Georgia Trust took swift action. Since then, the City of Atlanta, consulting arborists and a landscape architect deemed the tree to be a safety hazard. Today, Peachtree Arborists removed the tree with chainsaws and a crane. There was no damage to the property.

Georgia Trust President Mark C. McDonald stated in today’s press release, “The Trust’s consulting arborists recommended putting a safety cable on the tree which the Trust installed many years ago. This cable snapped recently, and we noticed that one of the main trunks of the tree had split into two separate pieces adjacent to the sidewalk. We had no choice but to remove the venerable tree which had stood guard on Peachtree Street for 102 years.”

Two years ago, another historic magnolia fell victim to the elements. The famed “Climbing Magnolia” of Piedmont Park, a beloved Midtown landmark, fell during a spring storm in 2017.  The old tree, which dated back to 1895, was also 102 years old at the time of it’s removal. The Piedmont Park Conservancy replaced the fallen tree by another 20-foot magnolia located slightly to the right of the old one, near the entrance to the Clara Meer gazebo.

The loss of these woody monuments is of growing concern to the city. Last month, Mayor Keisha Bottoms testified in front of Congress on the state of decline for our trees.

“Due to global warming, Atlanta already has lost 14 percent of its native tree species, and rising temperatures will continue to damage our tree canopy. The Cucumber-tree Magnolia and five species of oak trees once iconic to our tree line can no longer survive the local climate,” stated Bottoms during her testimony.

Atlanta Is Losing Its Trees

The city of Atlanta, Georgia has a reputation as the “city in a forest” due to its abundance of trees—an uncommon feature among major cities. Tree coverage was estimated at 47.9% for 2008 in a 2014 study, and Atlanta aims to increase the coverage to 50%. However, recent reports suggest the city is losing that battle.

Since that time, Georgia cities lost 19,000 acres of tree coverage between 2009 and 2014. In fact, Georgia ranks among the top five states to lose the most trees in recent years, a trend that is worrying.

Part of the loss stems from a loophole exercised by major developers to clear trees—and rather than replace them—simply pay a fine. The fines do not ensure the trees are replaced. The state legislature aims to close that hole with new regulations this fall.

“We have a city that people want to live in,” said Tim Keane, the Atlanta’s office of planning commissioner. “But if you continue to decline, and we have more flooding issues or extreme heat summers, which is what you have when you lose your canopy, then Atlanta loses its market place.”

The Atlanta area suffers many tree damaging events every year.  On average, Atlanta sees 55 thunderstorm days, 2 tornado sighting, 15 lightning ground strikes per square mile, and three days of freezing precipitation per year. Large wind events happen often as well, and there has been one major ice storm every couple of years. 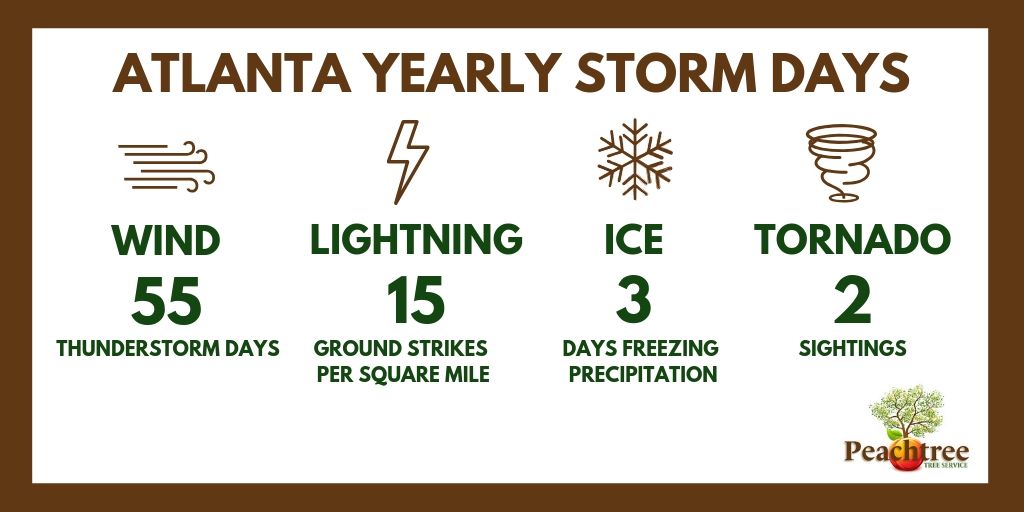 According to Dr. Kim Coder, Professor of Community Forestry, Tree Biology and Health Care at the University of Georgia, wind and precipitation load trees to their breaking point. Many trees lose twigs and branches against a driving wind storm. A tree attempts to “fall back” against wind forces, and any fallen leaves and branches on the ground have been sacrificed to assure tree survival.

Sometimes wind and gravity forces on a tree are too great and larger trees uproot and smaller trees snap.

With age, there is a great tendency for a tree to collapse around itself and fall. All trees fail either slowly over a number of years, or catastrophically in a matter of seconds. Thousands of trees fail in storms every year.

“Exceptional storms can damage a tree, either causing it to fail now or during a later storm. A multitude of storm blows can topple the strongest tree,” explains Professor Coder. “Trees have a limited life-span made shorter by storms. It is not the failure of a tree, but it’s long and strong life generating many benefits we should respectfully celebrate when a tree is lost.”

The Cool Factor Of Trees

Cities create “heat islands” where concrete jungles multiply the heating effects of the sun, often raising the temperatures by more than 20 degrees, according to the EPA.

Trees are among the most effective ways to cool a city down.

The shade of a single tree provides welcome relief from the hot summer sun. Several trees grouped together, create a profound cooling effect.  Cooling benefits a city’s citizens with energy savings and lower health risks from high temperatures. One study of mobile homes in central Pennsylvania by USFS researchers, showed that shade reduced summertime cooling energy needs by as much as 75 percent.

According to a recent study by the University of Wisconsin-Madison, trees play a big role in keeping our towns and cities cool. According to the study, tree cover can lower summer daytime temperatures by as much as 10 degrees Fahrenheit.

Specifically, the study found that forty percent canopy cover is the threshold required to trigger the big-benefit cooling effects. The greatest amount of cooling happens once that threshold is crossed over the scale of a city block or larger.

Rhodes Hall Magnolia Will Flower Into A Tree Planting Campaign 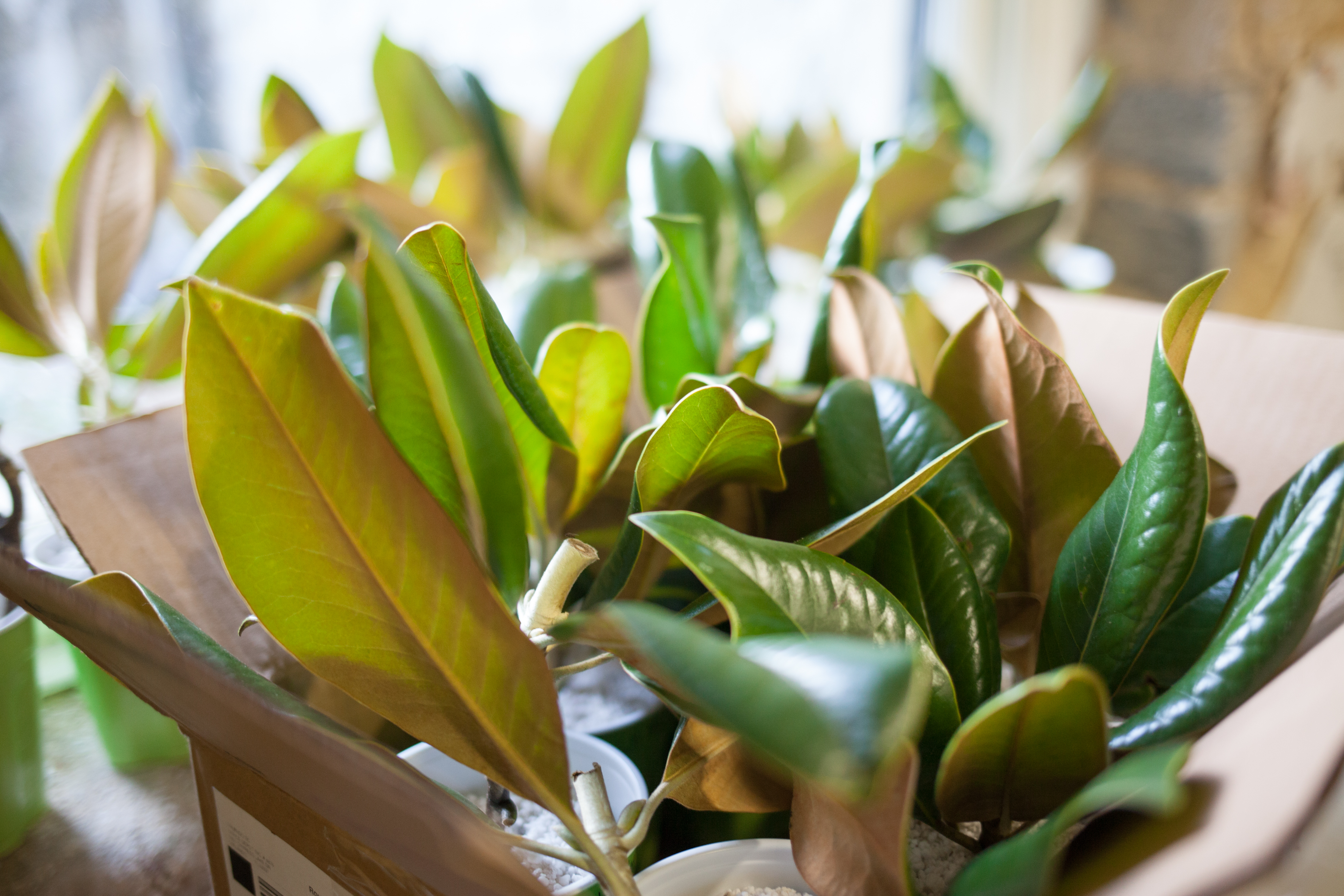 Understanding the importance of replacing and repairing Atlanta’s tree canopy, Peachtree Arborists and the Georgia Trust will be taking several cuttings of the historic tree for planting next spring.

Since the tree damage occured much earlier than magnolia’s normally go to seed, the arborist team took over 30 cuttings, and will grow them over the winter. Next spring, when weather is favorable for planting, the cuttings will be transplanted.

The number and location of transplantings will be determined once the arborist teams know how many cuttings survived. However, Georgians should not expect to see this plant’s familiar milky white flowers for a few years.

“Normally, a magnolia cutting takes 3-7 years to mature and flower again. So, it may take some time, but it’s important for our history and our environment to this great tree’s legacy continues,” said Michael Orme, president of Peachtree Arborists.

“In fact, with all the development happening in Atlanta, replanting trees we lose is more critical than ever,” continued Orme. “That is why Peachtree Arborists put a policy in place this summer to plant a tree for every tree we remove, no matter the size.”

El Niño Raises Stakes For Homeowners—What You Need To Know

2019 is an El Niño year, which typically means a wetter, stormier fall and winter season for Georgia. The increased storms mean more opportunity for tree damage.

The best advice to homeowners is prevention. The University of Florida which studied the impacts of trees in extreme weather events like hurricanes, recently found that survival for pruned trees was 73% compared to 47% for unpruned trees. Overall, pruned trees are 55% less likely to fail in high winds if they are pruned properly.

“We recommend homeowners perform a self-assessment every six months to check for any signs of damage or decay. To be extra sure, schedule an arborist to come and check your property every other year,” Orme advises. “This is the kind of service that can save you thousands in the future. Often, we’ll be able to identify the root of any problems and offer more affordable treatments before they become dangerous.

“It could be as simple as showing you the right way to prune or adjusting the environment around the tree. Removing suckers and creating the right kind of drainage can save the life of a tree, and thousands of dollars.”

Homeowners should look for signs of decay such as tree cracks, holes, leans or leaking sap and sawdust to spot a threatened tree.

“It is also important to note that damage occasionally takes months to manifest,” continues Orme. “For instance, pines can die slowly over a period of 6 months to 2 years after wind storms.  Oaks can take months to drown from underground flooding. This is why it’s important to regularly check your property, and consult a professional to understand hazards in your yard.”

When To Call A Tree Removal Service, And How To Not Get Scammed

Storm damage can cause some nasty tangles between trees, construction and power lines. It’s highly recommended with compound damage to engage a tree removal service.

When choosing a tree removal service, find a company that not only carries insurance, but specifically includes workers’ compensation. This is critical, as the biggest risk during tree removal is someone getting hurt—which could cost homeowners a lot more in the long run.

Beware of vendors with too-low prices, as all respectable tree companies generally price their jobs the same. This usually means they are not insured. Equally, vendors that ask for a deposit are also suspicious. It is not a normal practice in the tree business to ask for deposits ahead of time. However, tree services do expect to be paid on the day the service is completed.

It is also a good idea to check references and read reviews. Other customers can often give you a fair idea of what to expect when working with a new home service.

Finally, be sure to sign a written agreement before the work is started. This eliminates confusion over what is being removed or repaired, and helps guarantee the work is done correctly.

If you need help from an insured arborist with the proper equipment to complete your job on your schedule, call Peachtree Arborists at 678-858-5541 or email us at contact@peachtreetreeserrvice.com.